The Harvey Weinstein exposé has flung open the gates to air accusations of sexual abuse and harassment going back a full generation.

Thirty years ago, a scandal of a different nature rocked the Christian church with the disclosure of the PTL fraud, exposing the financial wrongdoing of Jim and Tammy Bakker, in addition to the moral failings of Jimmy Swaggart and others.

God judges first the Church, then the world

Recently this verse has haunted me:

For the time has come for judgment to begin with the household of God; if it begins with us, what will be the end for those who do not obey the gospel of God?
–1 Peter 4:17 NRSV

31 But if we judged ourselves, we would not be judged. 32 But when we are judged by the Lord, we are disciplined so that we may not be condemned along with the world.
–1 Corinthians 11:31–32 NRSV

Yet, when people continue to grossly misbehave, it goes on for only so long. God eventually brings it to an end. If we don’t police ourselves and mend our ways, wrongdoing becomes public, as we’re seeing at present.

If God didn’t spare the Church from embarrassment and correction in the 1980s, God won’t spare the world now. What other crimes are revealed in Hollywood and among our political leaders remains to be seen.

Yesterday (Nov. 18, 2017) I spent time in prayer, asking the Lord to speak to me and show me inner pictures. Although I wasn’t expecting anything so grave, I received some significant images I want to share with you. My questions are in bold.

I feel like I’m seeing something like a basket covered over with cloth, and it seems to be a flag, but I don’t know what kind of flag. Feels like a national flag, perhaps symbolic of all nations.

The flag is taken away, and underneath, the basket is full of insects, hordes of teeming insects. It gives me a feeling of uncleanness and revulsion.

5 Then the angel who was speaking to me came forward and said to me, “Look up and see what is appearing.”
6 I asked, “What is it?”
He replied, “It is a basket.” And he added, “This is the iniquity of the people throughout the land.”
–Zechariah 5:5-6 NIV

Lord, what else would you show me, or what would you speak to me about this?

I feel like the Lord is saying that He knows what lies behind all nations. I’m seeing the division of sheep and goats. I feel He’s saying He knows who are His and what the nations stand for, and they cannot hide behind their flag.

But God’s firm foundation stands, bearing this inscription: “The Lord knows those who are his,” and, “Let everyone who calls on the name of the Lord turn away from wickedness.”
–2 Timothy 2:19 NRSV

Now I’m seeing the American flag on a pole. I see it being lowered to half-staff. 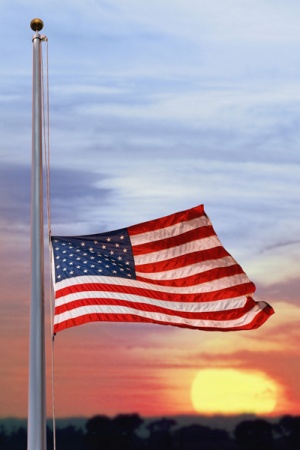 I looked up the meaning of the U.S. flag at half-mast:

FLYING THE FLAG AT HALF-STAFF: The pertinent section of the Flag Code says, “by order of the President, the flag shall be flown at half-staff upon the death of principal figures of the United States Government and the Governor of a State, territory, or possession, as a mark of respect to their memory. In the event of the death of other officials or foreign dignitaries, the flag is to be displayed at half-staff according to Presidential orders, or in accordance with recognized customs or practices not inconsistent with law. [Source: http://www.usflag.org/nff.half.staff.html]

Lord, what would you say about this? Or do you have any more pictures?

I see people kneeling around the Cross. Not the flag, but the Cross, confessing their own sins. A time of brokenness and repentance.

I have called for a true fast. I’m calling for the inward look and not the pointing of the finger. I’m calling my people—my people—to take the beam out of their own eye.

I will give you eye salve. Come to me and humble yourself before me, and I will raise you up, and I will shine the light of my glory upon you and pour out my Spirit among you.

Come to me and seek my face, and I will heal you and release you from the chains that bind you.

With this promise from the Lord, let us examine ourselves and receive Christ’s cleansing, making amends for any wrongdoing, that we may receive mercy instead of judgment.

For the holy Church of God, that it may be filled with truth and love, and be found without fault at the day of your coming, we pray to you, O Lord.
–Book of Common Prayer